Valencia city, celebrates each year the final days of the winter and the arrival of spring with spectacular fires and pyrotechnics. From March 15 to 19 (the feast of Saint Joseph, day of the father in the whole country), Valencia is given over to a carnival of bonfires, fiesta, fireworks and a healthy dose of satire known as Las Fallas, the fires. 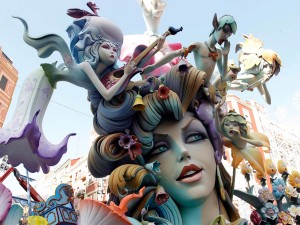 Displayed on every corner all over the city are colourful ninots, giant papier-mâché figures often more than 20 feet tall, that have been paraded through the streets and then exhibited on street corners. Each one in some way satirises a political figure, or a soap star, or characters from the movies or TV.  Some of them are grotesque – others playful and charming – all are larger than life and ready to be judged.

Every day at 2pm firecrackers are lit in the Plaza del Ayuntamiento in an noisy event called la Mascleta. This concert of gunpowder is very popular and involves different neighbourhood groups competing for the most impressive volley, ending with the terremoto, (literally means “earthquake”) as hundreds of masclets exploting simultaneously. While this may not be for the frail or faint-fainthearted, you understand how hearted, the Valencians got their valiant name.

Another important event is the Ofrenda de Flores a la Virgen de los Desamparados, a beautiful ceremony every March 17 and 18, that honours Valencia’s patron Virgin. Thousands of Falleras and Falleros arrive to the city from every corner of the Comunitat (Valencia State) and take the streets wearing traditional costumes and dancing to their neighbourhood or village bands as they wend their way to the Plaza de la Virgen to offer bouquets to the giant image of the Virgin.

Historians say that the origins of the festival go back to the time when carpenters cleared out their workshops and talleres at the end of winter, throwing out odds and ends of wood and old candles and lighting them on the street the day of Saint Joseph.

Nowadays, celebrations draw to an end with a fabulous firework display in the Paseo de la Alameda, called the Nit del Foc (literally “The Night of Fire”), on March 18. All Fallas burn all over the city the Crema night (including the winner of the competition) in a tremendous spectacle of fire and joy. Valencia is at that moment like Nero’s Rome, a city in flames. That’s why Valencians call this the best firework fiesta in the world!